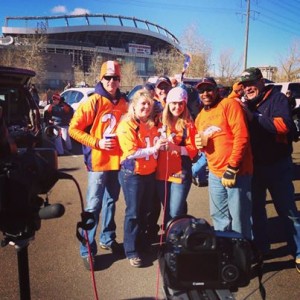 It is absolute Broncos mania across Denver right now after the Denver Broncos beat the San Diego Chargers at Sports Authority Field at Mile High this past Sunday. We headed out to the tailgate for our first episode of Caught Off Guard.  Carri Wilbanks, asks fans bogus questions. Watch as they pretend to also know that Matt Prater is out for a minor toothache, that Peyton Manning is benched for the game and that the NFL has decided to put couches on the sidelines starting next season. Share this video and you will be entered to win a KD Kanopy Party Shade, customized to however you like! Also, make sure to like our Facebook Page to increase your changes of winning!

Here are some non-bogus trivia questions to test your knowledge!

Q: When was the last time the Broncos played the Chargers in the playoffs?
A: Trick question. The two teams have never met in the postseason.

Q: The Denver Broncos broke a number of records this season. Which of these had stood for the longest prior to being broken?
A: The record for longest field goal. Before Prater broke it, it had been in place since 1970.

Q: This season’s NFL playoffs featured two of the Broncos’ division rivals, the Chargers and the Chiefs. However, the broncos have a chance to play another former division rival. Which playoff team used to be a member of the AFC West?
A: The Seattle Seahawks. They were an AFC west team from 1977-2001.

Q: The Denver Broncos have two mascots. Can you name them?
A: Miles (the guy in the suit) and Thunder (the actual horse).

Q: The current Broncos roster features both the tallest player and the shortest player in team history. Name them.
A: Brock Osweiler (6’8″) and Trindon Holliday (5’5″)