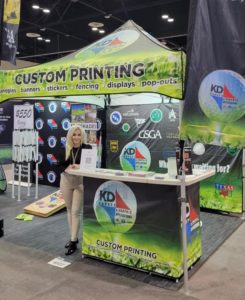 Tents have been around for thousands of years. In fact, the first evidence of the use of tents dates back to about 40,000 BC. Nevertheless, before the 1800s they were mostly used by explorers, military personnel and for temporary shelters. Merchants used tents as well, though the true business purpose of a tent with a logo was only adopted much later.

During medieval times, armies and royalty would paste crests and graphics symbolic of noble families on their tents. This was a very colorful time in the history of tents, and it was probably the first time in history when tents with logos actually became a thing. If you get a chance to attend a medieval festival, you can check out many interesting designs of tents featuring coats of arms and colorful blazons featuring noble houses.

In the modern era, companies started using tents with logos to promote themselves and achieve better results than their competitors. That is still the main use for tents with logos today in the corporate world. The first tent trailers came along in 1916 and changed entire industries, while teepees and cone-shaped tents were used frequently by companies operating in production during fairs and special events throughout the 20th century. One of the newest incarnation of the tent with logo came in 2004, when the first pop-up tents appeared.

To find out how custom designed tents, and other branded promotional products can benefit your business, look at https://kdkanopy.com/, KD Kanopy.